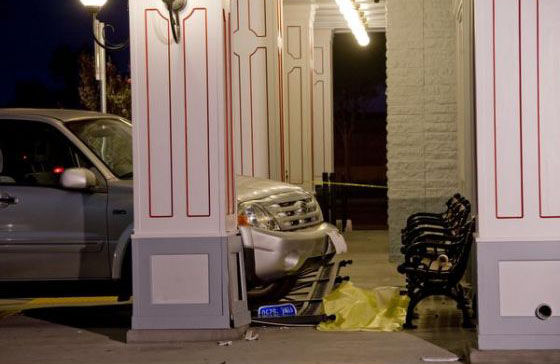 BUENA PARK – A Suzuki XL7 SUV driven by a man in his seventies is responsible for the death of one woman and injury of many others at a popular ice cream parlor in Buena Park last Friday.

The deceased victim has been named as 73-year-old Marisa Malin of Cerritos. She was sitting on a bench in front of the restaurant along with her granddaughter and several others. Around 6 pm the SUV, whose driver has not been identified by name, lurched forward, through a railing and into the group.

Approximately thirty minutes after the incident, Malin was pronounced dead on-scene. Among the others sent to the hospital were an 11-year-old boy, 12-year-old girl, 40-year-old man and 40-year-old woman.

The driver of the SUV, who is said to be cooperating with police, was questioned and released while the investigation continues.

The CEO of the restaurant chain, Michael Fleming, arrived on-scene shortly following the incident. He questioned a new law which requires that handicap parking spaces be level with the sidewalk in front of the building for easier access. Fleming proposed the possibility that had the curb been present as it would have been prior to the law, it’s possible the outcome may have been different. He also promised to speak with the city in an effort to improve the safety at the restaurant.