One of the iconic Wienermobiles was involved in a crash in central Pennsylvania.

The incident occurred near Harrisburg when the rolling hot dog slid off the road, slamming into a pole. Fortunately, no injuries have been reported, except for some front end damage to the 27-foot billboard.

The Wienermobile is known for touring the country, promoting and advertising the Oscar Mayer products.

The first version was produced in 1936, and since the drivers have become referred to as Hotdoggers.

Currently there are a total of eight Wienermobiles wandering the United States, two of which are bite-sized versions based upon the MINI Cooper platform, powered by a 1.6L inline-4 cylinder. 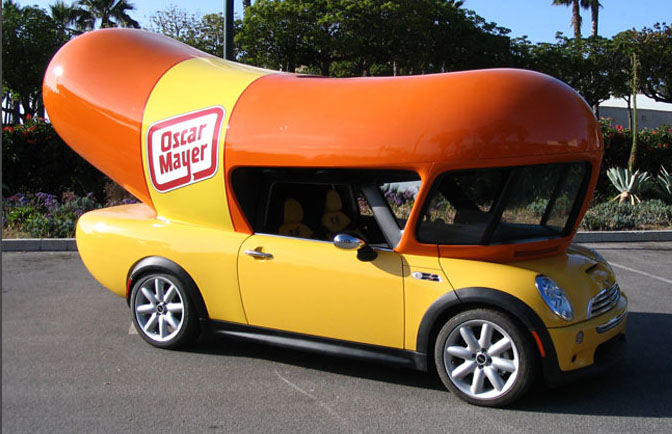 The version which crashed however appears to be one built on a full-sized GMC W-series chassis and powered by a 6.0L Vortec V8.

News stories concerning the crash have erupted with e-comics offering their best version of the story, from “He couldn’t cut the mustard and then tried to ketchup” to “Because of the cold police have attributed the accident to shrinkage”.

I have no contribution to the puns myself, but if you have any feel free to post them below, on my facebook page or send them to me on Twitter at @jRosenbaumLaw

John Rosenbaum is an Orange County workers compensation and personal injury attorney with a reputation for success in south Orange County. He has maintained a success rate of 99.8% over 30+ years in the field.

If you need one of the best workers compensation or personal injury attorneys in Orange County, give us a call today for your free no obligation consulation.